Buddleia Globosa oil on canvas  92x76cm now showing in my new solo exhibition Rococo at The Doorway Gallery, Dublin from 3rd February to the 1st March.


It was many years ago, while I was walking in Avondale gardens (Wicklow), which is Charles Steward Parnell’s old demesne, now owned and managed by Coilte that I came across this rather unusual flowering shrub, Buddleia Globosa.  You could say that this 500 acre estate is a testament to one man’s vision, as around 150 years ago Parnell completely changed this part of Wicklow’s landscape by planting and creating a haven of intricate woodland walks mainly pine trees of every shape and form; from huge multi-trunked Cyprus trees, to towering redwoods.  Even the common leylandii is given a place of its own here, in which it can be seen in all its surprising beauty.
Adjacent and opposite to the house itself there is a park- like swathe of grass,  where shrubs and rhododendrons have been planted at the edges of towering stands of eucalyptus trees.  Nearer the approach of the house, the shrubs become more low- forming and delicate, and it was here that the rather medieval- looking buddleia globosa grew.  Why I say medieval, is that is has that old antique look about it, the colours are all based around yellow ochre like a complex gilded and embroidered Tudor tunic.  The leaves are almost brassica like with lots of lichen olive green undulations, and mysterious soft pale undersides. The flowers are round and form in pairs or in threes, like berries.   Globes of ochre green that slowly change to a warm delicious yellow orange, little residual leaves near the flowering brackets curl back on themselves and look so intricate and decorative against the cerulean blue of a clear sunny June day.
Like all Buddleias they seem to strike well from cuttings and somehow one little broken branch found itself transported back to my home and within a year was planted out and growing fast. Looking out now from my kitchen window I am looking at one of these selfsame shrubs, nothing much to look at now, I must confess, and it has to be dramatically cut back every 2nd year or otherwise it becomes ungainly with unsightly woody bare branches. However, come April- May, I will be thinking to myself, maybe it’s time for another Buddleia Globosa painting.  And I always seem to paint them with a strong Indian Yellow background that threatens to swamp and dominate any subtle painting that I might have achieved in the flower- clusters of the tiny sunny florets that make up the characteristic round head.  But I can’t help myself, I think they are just the embodiment of happiness; to me they represent the sun, and I use them to celebrate the colour yellow, particularly that Indian yellow that has more than a hint of red about it. 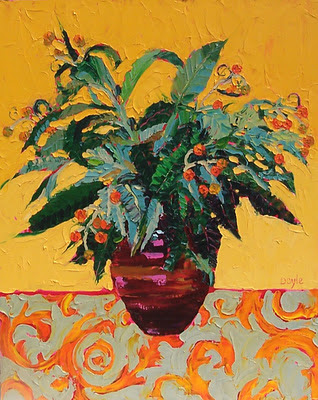 Buddleia Globosa  oil on board 2006
Posted by Lucy Doyle at 3:42 AM No comments:

Posted by Lucy Doyle at 1:41 AM No comments: 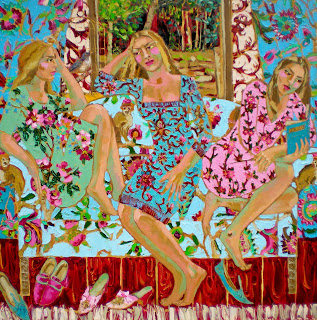 Rococo Sisters  oil on canvas 152x152cm, is  the largest painting in my new solo exhibition “Rococo”.  The show is about to open on the 3rd February and runs throughout February into March at The Doorway Gallery, 24 South Frederick Street Dublin 2. 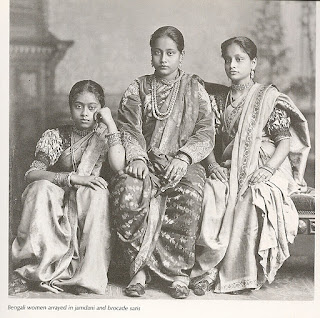 Image source: Traditional Indian Textiles by John Gillow and Nicholas Barnard
The idea for this painting came about many years ago when I first came across this photograph, of 3 women sat together, in my Traditional  Indian Textile book, that I often refer to  for inspiration.  I always  thought of these Bengali women as sisters, they are so enigmatic and beautiful, with all of their finery merging together as a single unit.  For many years I have tried to paint a composition with 3 seated figures connected, yet in context with their surroundings, and Rococo gave me such an opportunity.  When I was collecting research material for Rococo,  I came across this film still of the Marie Antionette cast on set, and immediately my Indian ladies were recalled to mind. 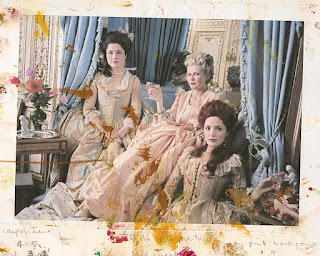 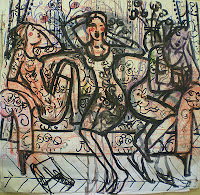 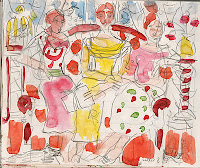 I have included some working drawings from my sketch book, that show how I worked out this composition, the actual specific details and actual colour combinations  would have been worked out on the finished painting, a  scary thought I know!   A bit like diving head first into  cold water, except in this case, its preferable to keep the eyes open!! 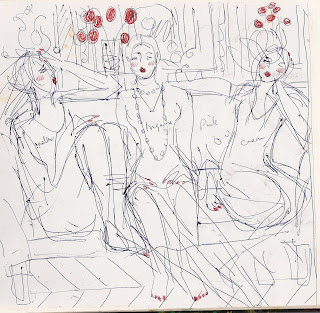 Dream or Sleep that is the question! 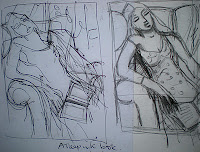 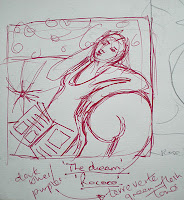 Here are some pages taken from my working sketch book, just to give you an idea of how I go about conceiving the idea of a painting and how that manifests itself into the finished article.

I adore Picasso’s’ The Dream’, his patterning in this painting, is so jazzy and energetic, in opposition to the passivity of the sleeping figure. This suggests to me that all that latent energy behind that sleeping face, has found expression in the decorative elements of the composition. A clever visual device to illustrate something so complex as a dream.
From my sketches  you can see that I was trying to compose my own’ Dream’ composition, with a format  similar to Picasso’s.  But I couldn’t quite work out how I was going to make the background dominate  the figure in the chair, that would suggest  a more Dream-like element. So it kept feeling like a ‘Sleep’ theme which to me is very different and not what I was setting out to achieve.    Then I was talking to a friend who was telling me about her planned day’s vacation after months of exhausting work, that had left her very frayed at the edges.  She was planning to book into a hotel for a day (on her own of course) and  spend the day in bed with all her favorite books around her; tea and meals to be eaten in bed and no one to disturb her; just the pure luxury of’ time out’ for one day. Once this vision got into my head it took over my original idea for formatting my composition, and instead, it evolved into a bird’s eye view of a figure on a bed with her chosen objects around her.   I drew and painted a  full size sketch for the finished painting which I forgot to photograph and has since been over-painted with a new idea for a new painting, but this would have looked very much like the painting itself.
I hope this to goes someway to help understand how I go about energizing and motivating myself into the painting process.   I think it goes to show that this process is sometimes only just that; just a means to an end; rather than an essential part of the finished product.
Now my only problem left, is what to call this finished painting, as I want to call it 'Dream' but somehow it's still suggesting 'Sleep' to me!!
Posted by Lucy Doyle at 5:09 AM No comments: 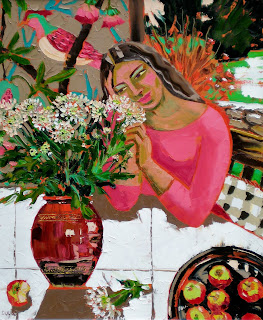 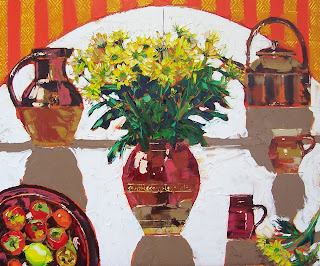 Luis Melendez  Still life with Salmon, Lemon and Kitchen Utensils 41x62cm
Posted by Lucy Doyle at 3:07 AM No comments: