I am currently working on a series of paintings for a solo show in November of this year.  I usually theme my work loosely around a title.  This helps me set the scene and mood for a series of connected work that hopefully will reinforce my ideology and theory behind  painting.  It sounds all very premeditated and grown up but it feels very far from that for me.  I find the whole business of creating paintings illogical and chaotic, its like trying to put loose feathers into a pillowcase; you know what you want to achieve and you know what you have, to achieve it: but the actual doing of it seems at first an impossible task, but as the work progresses, you get inspired by getting through each hurdle and the comforting knowledge that you have achieved it before and so the confidence builds as the work emerges and starts to feed back clues and information on how to proceed to the finish.  So for me building work around a theme is one way of controlling the endless possibilities and keeping the work on some sort of intellectual track.
For this upcoming show I am using the working title Scheherazade.  In itself, it is a great looking word, even though I can’t pronounce it!!  Of course it is the Arabian tale of the princess  Scheherazade who has to make up an elaborate and absorbing story for the King, who having been cuckolded by a previous wife, has lost his confidence in relationships and so like every story-book King must do, having spent one night with his new bride, has them executed.  Scheherazade however is a realist and has an imagination, and so imbarks on her 1001 nights of Arabian tales, and so seals her fate of living a long and married life.

I have always felt a deep connection to the old fairy tales of my childhood in the  Grimm's and Anderson's gruesome stories of dysfunctional families set in deep dark forests. 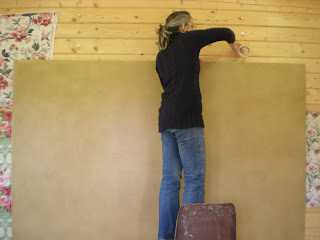 I started work on this show last summer, with a huge 6 foot by 8 foot canvas, the largest I have worked on to date.  The subject was Snow white and Rose Red, two sisters who live with their mother in a cosy cottage at the edge of a forest, and where one stormy night they hear a knock on the door and open it to a huge grisly bear faint with fatigue and hunger.  They of course, after their initial surprise and horror, take him into to the bosom of their home and later when he turns back into the handsome prince that he always was, he marries one of the sisters.
The colours in this painting are very like some of the work in the Walled Garden collection as there was a lot of follow through.
However in Scheherazade  I am trying to introduce a warmer palette of stronger reds and yellows and the rest of the exhibition reflects this, as can be seen with' Fishermans Still life'.
I decided to compositionally divide' Rose Red and Snow White'  down the middle and use this line of symmetry to balance each side out by creating cross links between the two halves of the painting with diagonal lines and colour- echoing.  Each side  works as an independent painting so as to enable the viewer to take in the imagery in a more accommodating scale.  The face of the bear in the centre of the painting is sort of unsettling and weird but its what I wanted to achieve, a slight threat to the domestic scene inside, however to subdue the intense impact of his voyeurism I painted him in monochromes  very near to the ground colour.

My other paintings in this collection have explored other fairy tales such as Cinderella, the Fisherman and his wife and the Little Mermaid, but as always with my subject matter the literal story telling is definately second place to  the colour, design and composition of my work, which is where my heart lies.

Posted by Lucy Doyle at 3:24 AM No comments: