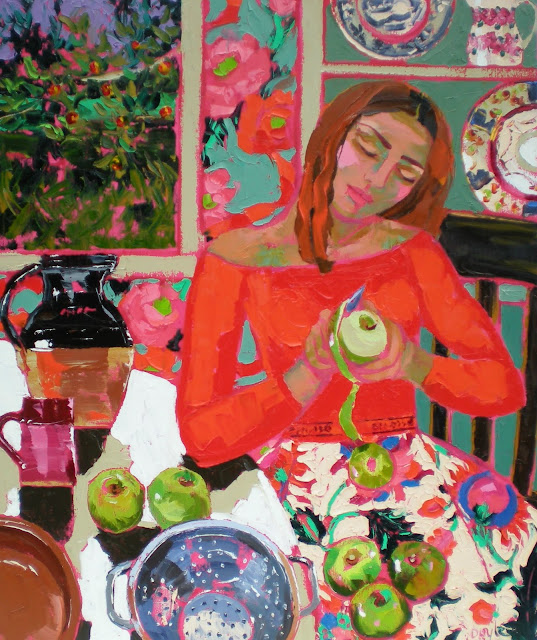 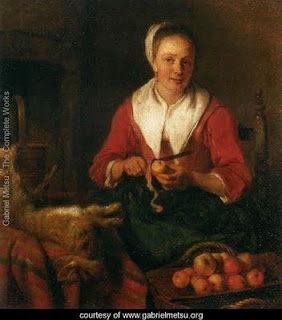 September is the start of the apple season.
Trying to get the peel off in one go, just for that lucky wish produces that long spiraling shape with the characteristic little round ends that Metsu paints so well in his A Maid peeling Apples, a painting that I encountered when the National Gallery of Ireland put on the fabulously curated major Metsu exhibition in 2010.
I just loved the way this 17th century Dutch painter arranged his space and the devices he so cleverly invented to create his uniquely cohesive compositions.
Metsu often places his main figures dominating the foreground, in this case three quarters of the woman is shown, the basket on her lap filling the bottom right of the canvas, the table with a still life on her left and the glimpse of a grid- like chair to the woman’s right.  I repeated all these elements in my composition of Peeling Apples and my woman also has a red top, my still life on the table is a nod to those beautiful earthy Dutch Still lifes that honor earthenware pottery and kitchen interiors so well.  Metsu’s backgrounds intrigue me so much, in that he too flattens his distances bringing them to the frontal plane with his verticals and right angle preferences.  However he often uses monochromes to paint his backgrounds which help to focus on the main action of the figures and objects to the foreground.  I use the same weight and depth of colour for my backgrounds as I do for my foregrounds which helps to bring all my values within my composition to the same level and reinforces the frontal plane in a modernist approach to picture making.
It was so wonderfully surprising  to get so much useable compositional tuition from this master who was working so many hundreds of years ago.
Hopefully I have produced in my painting a cohesive and balanced composition full of lipstick colours and sumptuous textures, a domestic kitchen scene in all the good and nurturing sense of the word; where good food is produced and eaten and all is respected.
My peeling apples is currently on show at The Doorway Gallery www.thedoorwaygallery.com  in Dublin’s city centre, just around the corner from the Kilkenny Design Centre off Nassau Street.
Posted by Lucy Doyle at 6:50 AM