October Spotlight- The Bowl of Milk 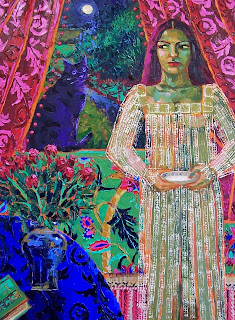 The idea for this painting came from Bonnard’s masterpiece of the same name, which I have always loved and greatly admired spending many hours poured over the image in books.  When I looked around the Tate modern in London in 2008, I came across Bonnard’s Bowl of Milk suddenly, and it was like bumping into an old friend, that sense of sheer joy of recognition still lives with me today.
Bonnard conceived his painting, during a restless night when he couldn’t sleep.   He had friends staying over, and on entering his moon-bathed kitchen, he surprised his lady guest about to give the cat a bowl of milk.  She was wearing a long pink nightdress and she and the whole room was bathed in moonlight that was flooding through the window. How intoxicating is that?
My composition evolved slowly and though I painted it in 2009 for the Pastoral Collection it was never exhibited as I was still living with it and working on some unresolved areas.   It’s now one of my favourite paintings, as it is both atmospheric  and balanced yet  visually complex and  challenging to look at.
This painting has recently been sent to my new London gallery The Russell Gallery  in Putney, and will be exhibited in their upcoming  Christmas group show . 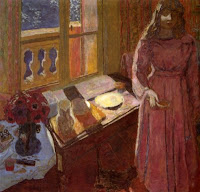